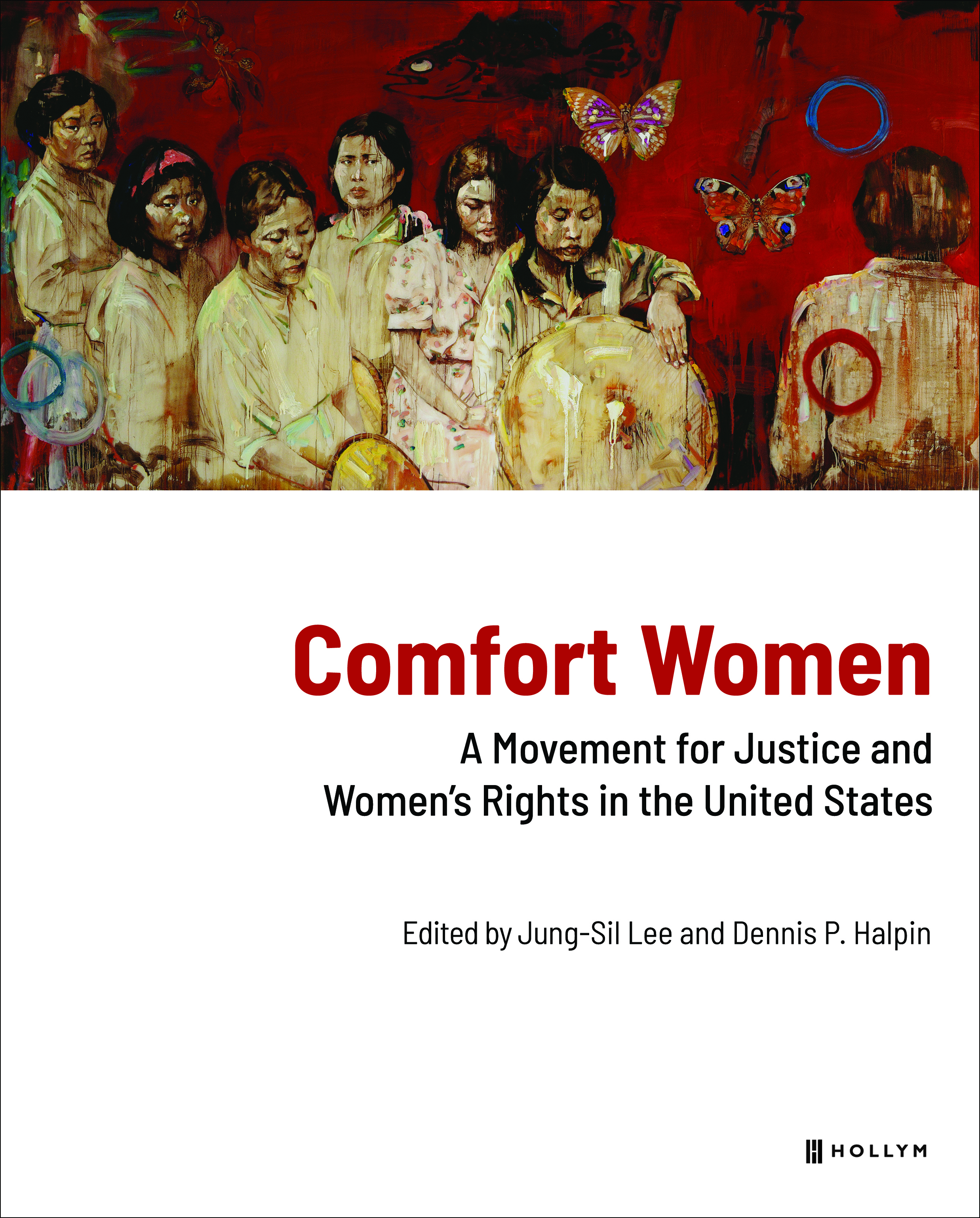 This new edited volume archives nearly thirty years of activism, records the achievements of the “comfort women” redress movement on American soil, and highlights the significant historical moments by members of the Washington Coalition for Comfort Women Issues (WCCW), its elected officers, congressional staff members, non-profit organizations, scholars, and artists. Together with its many pages of primary resources and historical photographs, the volume also offers useful links to resources for future generations who wish to pursue the impact and legacies of the Korean “comfort women”.

The following is a set of bibliographical entries prepared by Frank Joseph Shulman that describe this work. They contain a “title gloss” (mini-annotation) and a small number of selected keywords for each of its chapters.

Introduction: Why Do We Deal with the “Comfort Women” Issue in the U.S.? Introduces the contributions respectively by Jung-Sil Lee, Mike Honda, Mindy L. Kotler, Dennis P. Halpin, Bonnie B.C. Oh, Margaret D. Stetz, Frank Joseph Shulman, and Yangmo Ku in an edited volume that is designed to serve as a stimulus for further studies about the “comfort women” and to encourage the diverse advocates of this cause to continue their productive cultural and recontextualized work in order to deepen and expand on the discourse.

28 Years of WCCW Advocacy against Injustice to “Comfort Women”. Explores how the “comfort women” grassroots movement in the United States came together with the support of many individuals and the Washington Coalition for Comfort Women Issues, and examines the evolution of the “comfort women” redress movement both chronologically and thematically since its inception in 1992. Includes the founding of the WCCW, its grassroots advocacy, the passage of U.S. House Resolution 121 in 2007, various educational initiatives, artistic representations, and its project of recording and archiving the history and activities of former “comfort women” and “supporters” of this issue.
Pages 1-31.

Mike Honda (D-CA).
Chronicles the experiences and passage of House Resolution 121 in the U.S. House of Representatives and the significant support of Representative Mike Honda. Contains the edited transcript of two interviews with Honda in 2019 that cover several topics including Honda’s Japanese American identity, the use of the term “coercion”, the House resolution process, the responses of different Japanese and Japanese American groups, the success and limitations of the resolution, Congress’s continuing role, Prime Minister Abe’s reactions, and what the resolution can teach the U.S. about transnational justice. Pages 33-52.

Kotler, Mindy L.
“Comfort Women”: The Making of U,.S. House of Representatives Resolution 121, 110th Congress, 2007. Contends that the resolution advocating justice for Imperial Japan’s wartime sex slaves was a thoroughly American invention and that from its conception to its passage in July 2007 it reflected a domestic political calculus rather than an international one. The resolution was successful because it appealed to its American constituencies rather than responding to foreign interests, and it was part of a greater attitudinal change in the United States regarding violence against women.
Pages 53-74.

Halpin, Dennis P.
The “Comfort Women” Issue Brought to the Forefront of the U.S. Congress. Addresses the involvement of key members of Congress including Lane Evans, Henry Hyde, Tom Lantos, Eni Faleomavaega, Mike Honda, Nancy Pelosi and Ileana Ros-Lehtinen in raising the issue of the sexual servitude of the “comfort women” under the Japanese military during World War II. Also examines from the point of view of a Congressional staff member the initially successful efforts by the Japanese government to block legislation and the ways in which the long dormant Korean American community, assisted by other Asian victim ethnic communities, lobbied to advance an examination of the “comfort women” issue and ultimately the passage of House Resolution 121.
Pages 75-98.

Oh, Bonnie B.C.
The First Academic Conference on “Comfort Women”: Its Impact and Legacies. Examines the background, details the organizational efforts, and discusses the impact of “The Comfort Women of World War II: Lessons and Legacies”, a conference that was held at Georgetown University in Washington, D.C. on September 30, 1996. Oh based this article in part on her personal experience as one of the three primary co-convenors of the conference, and the proceedings together with additional material were subsequently published as Legacies of the Comfort Women of World War II, edited by Margaret Stetz and Bonnie B.C. Oh (Armonk, N.Y.:M.E. Sharpe, 2001).
Pages 101-110.

Stetz, Margaret D.
Girls and Military Sexual Slavery through a Feminist Intersectional Lens. Examines how and why the testimonies of “comfort women” survivors achieved a sympathetic reception in the United States during the 1990s and the means by which these narratives circulated throughout feminist communities in particular. Also explores some of the ways in which the feminist understanding of these stories has changed as American feminism itself has shifted towards intersectional perspectives that highlight oppression based on social categories such as ethnicity and age rather than gender alone. Pages 111-124.

Can the Arts Heal the Wartime Trauma of Sex Slaves? Case study of Visual Art, Film, and Performing Arts. Analyzes the diverse genres and styles of a number of artists who effectively appropriated and re-contextualized historical and archival documents (including photographs) to express their sympathies towards the “comfort women” and to tie wartime sex crimes to current broader dialogues about women’s rights and sexual violence. Deals with all genres of the fine arts, film, music and opera, and focuses on the subjects of the artists’ works and the scope of their artistic endeavors.
Pages 125-154.

Western-Language Doctoral Dissertations on the Korean “Comfort Women” 1995-2004: An Annotated Bibliography with Brief Information about the Educational Backgrounds of the Dissertation Authors. A chronologically arranged bibliography of the forty-six dissertations dating from the first decade of doctoral-level research on the “comfort women” that deal in their entirety or just in part with this subject and that were written by American, Canadian, European, Japanese, Korean and other Asian scholars. Prepared with the intention of increasing current awareness of these dissertations, expanding their readership, and facilitating their greater use, the bibliographical entries contain descriptive annotations of the dissertations along with information about their availability and their tables of contents.
Pages 155-190.

Assessing the Transnational “Comfort Women” Movement, 1992-2019. Examines the historical background of the “comfort women” issue, explores the origins and development of the transnational movement involving a variety of self-organized advocacy groups in South Korea, Japan, the United States and elsewhere, discusses its main activities, and assesses the movement’s achievements and limitations with consideration of the extent and way in which it prompted the Japanese government to change its indifferent stance on the issue to a somewhat more apologetic attitude.
Pages 191-209.

The Roles of “Comfort Women” Memorials in the U.S.: Continued Activation of the Spirit of House Resolution 121. Chronicles sixteen memorials — ranging from commemorative stone slabs to Girls statues — with particular consideration of how and why they were built, the processes involved in their construction, the responses and outcomes of their unveiling, and the significance of their presence in contemporary discourses of the “comfort women” issue. Highlights the memorials in Bergen, New Jersey, the Statue of Peace in Glendale, California, the “Comfort Women” Memorial Peace Garden in Fairfax, Virginia, and the “Comfort Women” Memorial in San Francisco. Pages 211-237.

Fifty-two appendices including the texts of letters, newspaper op-eds, and legislative resolution.

AVAILABILITY OF THIS VOLUME
The edited volume is currently available only in paperbound format (8″ x 10″). All orders from within the United States should be directed to the Washington Coalition for Comfort Women Issues (WCCW) website:

Copies purchased from the WCCW are $59.50 including shipping and tax.

Other inquiries may be directed to the editor of the volume, Dr. Jung-Sil Lee, at Jung Sil Lee<jslee78910@gmail.com>

Comfort Women A Movement for Justice and Women’s Rights in the United States.

Only logged in customers who have purchased this product may leave a review.

There are no reviews yet.